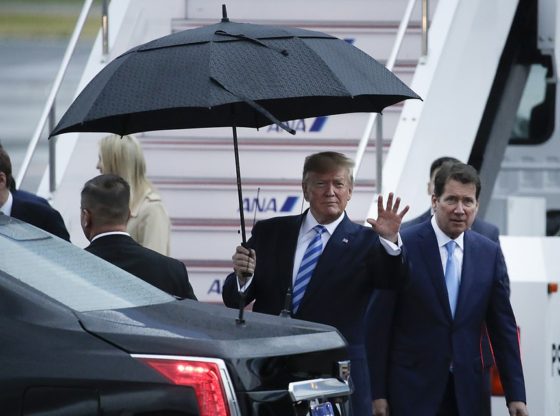 SHANGHAI – Asian shares stumbled on Friday amid rising doubts that a highly anticipated meeting between President Trump and China’s President Xi Jinping on Saturday could yield a resolution and easing of  trade tensions.

Uncertainty on whether the anticipated talks will yield any progress in terms of resolving a year-long trade dispute between the world’s two largest economies is impacting global markets.

Regardless of the outcome, McKenna said, “we will not be in a holding pattern on Monday morning.”

On Thursday, White House Economic Adviser Larry Kudlow said that President Trump has agreed to no preconditions for the meeting which is set to take place on Saturday at the G20 summit in Japan.  He also the President is maintaining his threat to impose new tariffs on Chinese goods in the event that both bilateral talks and negotiations fail.

Kudlow also dismissed a Wall Street Journal article that stated China was insisting on lifting of sanctions on Chinese tech giant Huawei Technologies Co Ltd as a precondition to the talks while also suggesting that the Trump Administration had tentatively agreed to delaying the touted new tariffs on Chinese goods.

On Thursday, China’s central bank pledged to support a slowing economy as global risks rise, ahead of the release of data that is expected to show China’s factory activity shrank for a second consecutive month in June.

“Central expectations for the G20 meeting between Trump and Xi are that negotiations will resume, additional U.S. tariffs will be delayed, China will buy more U.S. goods and talks over tech-trade will gain renewed focus,” analysts at ANZ said in a morning note.

“However, as the difficulty of resolving economic aspirations between the two countries is herculean, markets remain cautious.”

“As the equity market is now fully pricing in a 50 basis point cut, market disappointment could be significant … And if the Fed follows through with a cut despite a brighter trade outlook? Beyond the knee-jerk euphoria, expect minimal market reaction – this last scenario is exactly what the market is already expecting,” she said in a note.

Highlighting mixed market views on the outlook for the weekend’s Sino-U.S. talks, yields on benchmark 10-year Treasury notes US10YT=RR rose to 2.0123%, compared with a U.S. close of 2.005% on Thursday, despite the reversal in equities.