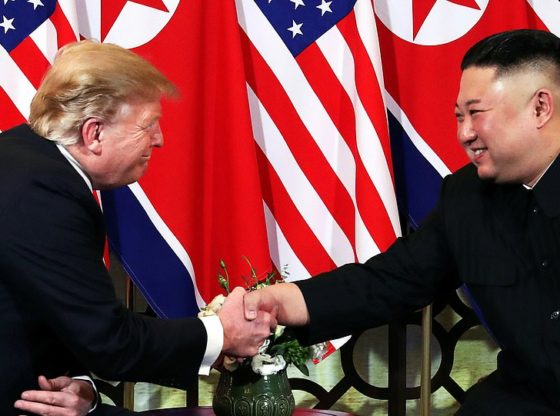 President Trump and Kim Jong Un met on Wednesday in Hanoi for the highstakes meeting and negotiation with the eyes of the world upon them particularly on the US President Donald Trump.

This was the first face-to-face meeting in 8 months between the leaders since their first summit last June in Singapore.

Previous hostilities and decades of mistrust were replaced with smiles,  hope and cautious optimism for the day.  The pomp and circumstance of the event captivated the world and mesmerized the global press that followed their every move and statements.

They shook hands, smiled for the cameras and exchanged pleasantries like familiar old friends meeting once again after a long time before seating down for a photo op and taking brief questions from the media hounds.

Afterwards, they sat down for a “Friendship Dinner” the first one-on-one sit meeting between Trump and Kim that went longer than the initial 30 minutes than it had been slated for.

Expectations were high, something not lost to both sides prompting a response from President Trump.

“A lot of things are going to be solved I hope.  I think it will lead to a wonderful, really wonderful situation long-term” he said at the beginning of dinner.

In a remarkable turn of events unlike none in the past, Kim Jong Un also addressed the media and spoke of current events and the summit.

“There have been efforts, whether out of hostility or not, to block the path that we intend to take but we have overcome all these and walked toward each other again and we’ve now reached Hanoi after 261 days,” he said in reference to the two leaders’ first historic meeting in Singapore.

“We have met again here and I am confident that we can achieve great results that everyone welcomes,”he concluded.

With diplomatic gamesmanship in obvious display, each side is hoping for a win or at least to gain some concession from the other.

Asked if this summit aptly dubbed the “Summit of Seconds” would yield a political declaration to end the Korean War, Trump told reporters: “We’ll see.”

Reports indicate that the two parties were looking to discuss certain issues of importance deemed beneficial to the other but also raising questions on the likelihood of the success of the talks particularly on whether not there will be any consensus or agreement on the said issues.

These include opening a liaison office in each other’s country, closing down North Korea’s Yongbyon Nuclear plant, agreeing to end the almost 6 decades old Korean War and some modification of sanctions or sanctions relief.

President Trump and Kim Jong Un are set to meet again on Thursday where the two are scheduled to host a Joint Press Conference (JPC) this time dubbed a “Joint Agreement Signing Ceremony” in the hopes of getting some sort of deal and then followed by lunch before ending the summit.

Interpreters from both sides were also present.

The unique unpredictability of President Trump is what makes his presidency so successful and the most followed ever in the world in terms of actions, policies and everything he says and does.

The talks are expected to continue on Thursday for the final round with the hope of signing some form of deal at the end to mark the success of the summit albeit how small.