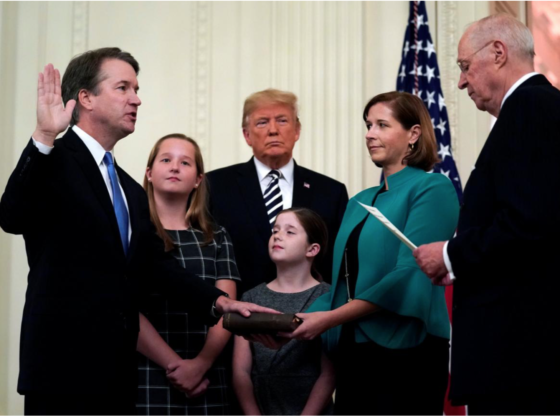 In another monumental moment, U.S. Supreme Court Justice Brett Kavanaugh was on Monday evening sworn in as the 114th Justice of the Supreme Court where he received the oath of office from the retired Justice Anthony Kennedy whom he is replacing.

His wife, Ashley Kavanaugh, their two young daughters Liza and Margaret together with President Trump stood beside him as he took the oath before eight other U.S. Supreme Court Justices and guests in a packed East Room at the White House.

Speaking at the ceremony, Justice Kavanaugh said he was not “changed” by “a contentious and emotional” battle during confirmation process which degenerated into a circus courtesy of the Democrats and their resistance movement.

“I will always be a team player on a team of nine,” said Justice Kavanaugh who also said he was “honoured to serve alongside colleagues” he greatly admired.

“Although the Senate confirmation process tested me as it has tested others, it did not change me,” he added.

Before the ceremony started, President Trump took an unprecedented and unusual position by apologizing to Justice Kavanaugh for the Democrat’s unceremonious smear campaign against him and his family.

“On behalf of our nation, I want to apologize to Brett and the entire Kavanaugh family for the terrible pain and suffering you have been forced to endure. You, sir, under historic scrutiny, were proven innocent.”

Although Justice Kavanaugh was ceremoniously sworn in on Saturday in the aftermath of an unpleasant confirmation process, it was President Trump who insisted on having an official ceremony with all the pomp to legitimize the process which was both damaged and delegitimized by the Democrats.

Justice Kavanaugh’s official duties on the U.S. Supreme Court are set to begin on Tuesday when he will attend oral arguments as the ninth Justice, his permanent presence cementing a 5-4 Conservatives majority.

In breaking with tradition and setting a historical precedence, Justice becomes the first ever Justice of the Supreme Court to have an all-female contingent of law clerks as staffers.

According to U.S. Senate Records, the Kavanaugh confirmation was the closest roll call for a Supreme Court Justice since 1881, when Stanley Matthews was approved by 24-23 votes.