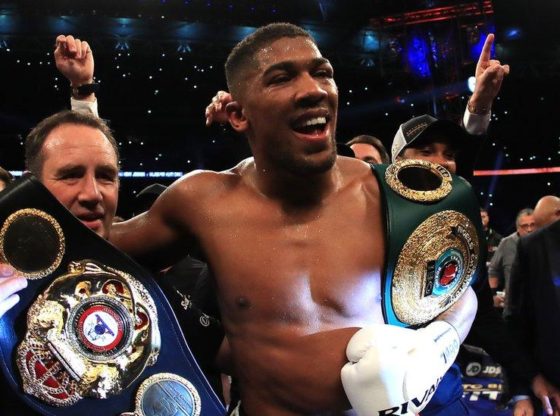 WEMBLEY – Anthony Joshua produced the performance of his career to add the WBA world heavyweight title to his IBF crown with an enthralling knockout win over Wladimir Klitschko at Wembley Stadium.

A post-war record 90,000 fans at the national stadium were treated to a see-saw contest, Joshua dropping the former unified world champion in the fifth round, before being put down – for the first time in his 19-fight career – in the sixth.

Both men looked in danger of being stopped over two rounds which will live long in the memory, before Joshua delivered the clinical blows in the 11th.

The Briton landed a brutal uppercut which gave him the platform to send Klitschko down with an immediate flurry.

The Ukrainian stood, was dropped by a left hook again moments later, then stood again, only for referee David Fields to save him when pinned against the ropes.

Joshua threw his arms into the air as roars rolled down the Wembley tiers. He had come through his stiffest test to date, while Klitschko too had answered questions, showing he remains competitive at world level, even at 41.

He will rue not finishing the job when he floored Joshua and appeared tantalisingly close to reclaiming two of the titles he lost in his last fight against Tyson Fury in 2015.

An epic fight – how it played out

After lengthy ring walks, fireworks, deafening noise and a rousing British national anthem, an opening six minutes of skill over power played out.

Klitschko flicked his jab, his left hand waving in front of Joshua’s face. Feints from both men stood out as they hunted openings.

A solid right hand early in the fourth caught Joshua, who responded with the same shot later in the round, nodding at his rival on the bell.

And then came the power punching in a pulsating fifth round. Joshua shook his man before sending him down face first with a flurry of punches.

The crowd sensed blood, urging the Briton forward, only for Klitschko – cut above his left eye – to show the heart which has made him the most dominant heavyweight of the 21st century.

He pinned Joshua to the ropes, turning the round on its head, and then came out in the sixth to administer an overhand right which crumpled the champion. In uncharted waters, Joshua answered the count and faced a stiff examination before the bell.

This was now an epic, living up to the hype, heavyweight boxing at its most captivating.

The pace dropped, it had to, though any fear of Joshua’s career-high weight slowing him down was unceremoniously put to bed in the 11th as his power unified the titles.

The sweat flew from Klitschko’s head as the telling uppercut landed crushingly, before Joshua hunted down his opponent to seal a historic win.

The ‘Best of British’ delivers

Less than three years ago, Joshua fought here low down the Froch-Groves undercard, but 13 fights later he stood centre stage, seeking a win promoter Eddie Hearn said would make him “the biggest star in British sport”.

Hearn, a bevy of global sponsors and a sizeable entourage have backed and built the Joshua brand – investment which looks stunningly astute on a night when his reputation was further enhanced.

Through his litany of knockout wins there have been question marks. Could he withstand punishment? Did he have the skills to match a world-level fighter?

He answered emphatically, complementing solid technique early on with resistance when troubled and brutal power down the stretch.

This bout was televised by two networks in the US, only the third time in history such a deal has been struck, and the Las Vegas fight nights enjoyed by Lennox Lewis – the last undisputed heavyweight champion – look to be on the cards.

The wild celebrations of those closest to him underlined just what this meant. A man carrying a huge weight of expectation had delivered.

Defiance has poured from Klitschko in recent months. The Ukrainian has compared himself to Everest, talked of an “obsession” in bouncing back from defeat by Fury, and preached about his peaceful state of mind as challenger, not champion.

Such a steely demeanour hinted retirement in the short term was out of the question, and he is understood to still have three fights left on a contract with German broadcaster RTL.

He looked a different fighter to the one beaten by Fury, and markedly better than in his latest points win over Bryant Jennings, but the size of his task was huge.

He was the underdog with bookmakers, with only George Foreman having won a recognised world title past the age of 40.

The trademark jab and power right hand were on show, as was guts aplenty in getting up three times.

And, despite losing the richest bout in British boxing history – with an estimated £30m pot shared by the fighters, it is clear the fire still burns.

Reaction – ‘I came to hurt him’

Joshua on BBC Radio 5 live: “I knew it was possible to hurt him, but I am learning round by round. I’m learning under the bright lights.

“I don’t come to box, I come to hurt people. With all due respect, I came to hurt him.

“At the end of the day, I figured out what I had to do and got him done.

“I’m coming back to Wembley. I’ll look forward to seeing you here again.

“There’s been many a time in training when we go into the 11th round and I’m tired but I know I have to keep it up because I have to go the distance.

“I showed tonight that fights are won in the gym. It gets tough and boxing isn’t easy. You have to have the whole package.”

Analysis – ‘Those punches came from the depths of his soul’

“What an epic display of determination and guts from both fighters.

“Joshua was put on the floor for the first time in his career and he got through that test.

“We have to ask, is it the end of the road for Klitschko or do we want to see it again?”

“There comes a time in a boxer’s life where no amount of training or sparring will help.

“There comes a time where it comes from within. It is DNA, or whatever you want to call it.

“Those punches came from the depths of his soul.”